I’m the kind of person who will chase a dream professionally. That dream will be killing me, and I will refuse to let it go.

“I’ve told everyone I’m going to achieve you!” I’ll tell the dream. “So I am NOT going to let you go until no one is looking anymore!”

It took the most public humiliation of my life to learn to that some dreams are better sampled in slumber.

The Queens of Comedy were launching their big debut. And they were calling for ladies with spunk to join the queue of the Cotilda’s and Kansiime’s.

“Come all ye who think you have talent!” they called. “We are giving ladies the stage to be as awesome as us!”

“That’s me, man!” I told everybody. “I am going to be discovered, maaaahhhhnnn. I’m going to go on tours once people realize how awesome I am!”

My brother begged me not to do it. My sister giggled as I practiced. My co-workers stared at me in wonder. 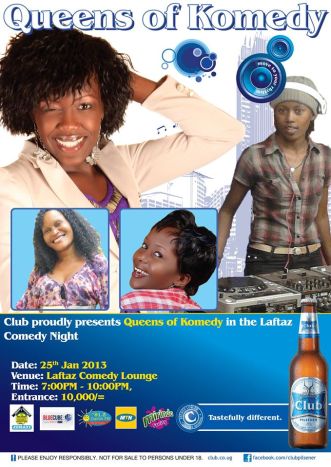 I didn’t listen coz I know who I am

The fateful evening dawned at Laftaz Lounge in Centenary Park. The place was packed. Of the hundreds of people I’d invited to watch my big debut, only three people showed up. My former boss, my sister and a recently acquired Facebook friend.

“They’ll be sorry”, I thought sourly of those who had betrayed me. “One day, they’ll be begging me for tickets”.

I was a disaster.

People laughed for the first five seconds. After that, it was a painful silence as my honestly boring jokes played games with themselves. The minutes stretched and I considered just stopping and walking off. I straightened my back, stuck my chin up and carried on.

A group of people begun to clap and cheer loudly in a bid to drown my voice out. I shouted louder into the microphone. Cries of ‘Banange, Genda!’ begun to drift my way. I stuck my lip out and ploughed on. When I got off the stage, the applause was genuine as people were so happy to see me leave.

One of the queens approached me again for the next event. Told me it takes time for anyone to find their feet.

I assured her I was quite fine not being funny, thank you very much!