Published in the Daily Monitor: http://www.monitor.co.ug

I’d like to start off by saying this only happened to me once, and that does not mean ‘Comfort’ branded buses are to be distrusted. But ain’t no way I’m ever getting on one again.

I was travelling to the North and a friend said they’re the BEST buses to take. Humph. Ruhange wange, what was to happen to me.

You know how you can tell a driver is a buffoon who does not care about the souls he’s carrying on board? This driver was such a buffoon. I begun to suspect this buffoonery when he told me to ‘move over’ to make way for an extra passenger or two.

“Nawe, take away your kajanja!”, the other passengers protested. “We want to go.”.

I spoke to them in my version of French that begins with an F and ends with a U. In English I said: “Do you know overloading causes accidents? Do you know it also makes it difficult to escape if we do have an accident?”

They talked French back. Only one man said:

“The girl is right. You!” He turned to his neighbor, “You’re busy abusing her. Get off and give her your seat and she and I will not be squeezed”.

I sat next to him and noted that apart from our row, every other row was stuffed with an extra person or two. Shortly after we set off, I knew we were in trouble. The driver was speeding, but only I was panicking.

“Drive carefully, you moron!”, I shouted from my seat. The passengers shouted back at me for him.

About two hours in, I heard a strange sound. All of a sudden, I was blind. The back of the bus was engulfed in smoke. Were we on FIRE?

Oh, hell to the nah.

In Guiness Book record time, I tossed my luggage out the window, crawled over my frozen co-passenger and shoved my bum in his face. I then threw myself out after the luggage while the bus was still moving. I thank yoga for the flexibility with which I did it.

The bus screeched to a halt while I took a boda to the nearest lodge, ‘coz this gal was going back to Kampala the next day. No work or friend was worth my traumatized body continuing on. 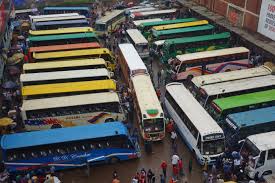 The driver overloaded our bus right at the taxi park where I had purchased my ticket. I have been made to understand that it is not abnormal. It should start being abnormal. As Ugandans, we should stop being content with mediocrity and start to demand excellence in customer service and welfare. If I pay for a seat, I pay for a seat, a whole seat and nothing but a seat AND do not expect to be bullied into discomfort so a bus company can make more money while risking our lives in the process.

1 thought on “Comfortable, my behind”